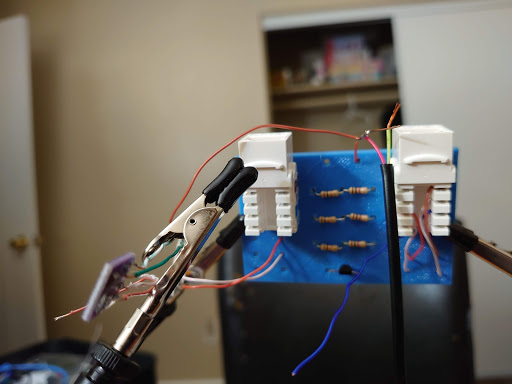 I basically took three lefts instead of a right but the journey wasn't all for naught. I got validation that I had overcome my gaps in electronics knowledge since the leaky air conditioner.
One thing that went very well was my process. In past projects I've had frustrating failures by pushing through to a complete solution. When something didn't work I had gone so far that troubleshooting meant tearing down and starting over. This time I worked much more incrementally, validating my progress at each stage and having the chance to make corrections. While I rarely needed corrections along the way, the anxiety that I might have screwed something up and wasted all my time was minimal.
I diagrammed lots of things. I put things together on the breadboard to make it work then translated that to a circuit diagram that I could follow more easily. When wiring up the CAT-5 I wrote down which colors would do what before I made any connections. From then on I could easily know which was the correct wire. I could then maintain that color scheme for portions downstream from the cable to keep it consistent and easier to wrap my head around. I haven't built up my electronics chops yet to keep what each wire does in my head.
Wire type really matters. I've often used internal CAT-5 strands as plentiful solid-core wire with color-coding. When I put that on the female pin header it didn't flex for anything and was very hard to work with. I had some stranded but only three colors, which complicated things. I ordered an assorted color stranded wire kit and for subsequent projects and it's been great.
The weather sensor was a great addition. I loved being able to check it from my phone. I ended up scrapping the raspi setup and setting up just weather sensors with the BME280, an Adafruit ESP8266 board, and some software that made the data available in Prometheus format.
Ultimately we don't learn a whole lot from our successes; we learn much more reflecting on failure. Maybe my missteps can be useful to you.
Posted by Jason Mansfield at 5:29 PM